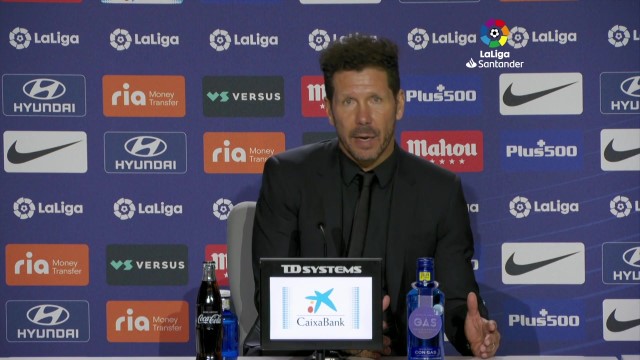 Atletico Madrid coach Diego Simeone commented on his team’s 1-0 victory over Ronald Koeman’s Barcelona in the last La Liga match played at home on Saturday. «I understand that the game of football is game by game, sometimes it’s a matter of winning, sometimes it’s a matter of losing (…) and today we had to win, that doesn’t change at all the course of what we are looking for. I leave today feeling happy with the team’s effort,» said the ‘rojiblanco’ coach during a post-match press conference at Wanda Metropolitan Stadium. «I’m talking about what I always expect from Barcelona, so I’ve been watching and it’s been very close to the best games they’ve played». In Turin he had a similar performance (…) both teams were waiting in midfield to have a better control of the space and then we were trying to hold the ball to try to break offensively. I think we did better and that’s why we played a great game,» he added. Barca coach, Ronald Koeman, assured that it was inadmissible the goal they got in the added time of the first half. «I think that the goal of the Atletico was our fault because in the 47th minute, having the ball, losing the ball and they score a goal 1-0, I think that it is not good and it cannot happen,» Koeman said. After Saturday’s victory against the ‘Blaugrana’ team, Atletico de Madrid is now in second position in the table, leading the league along with Real Sociedad. Barcelona is lagging behind in eleventh place.
https://ruptly.tv/