Домой Спорт Spain: ‘The fans can be happy and proud of the team,’ —... 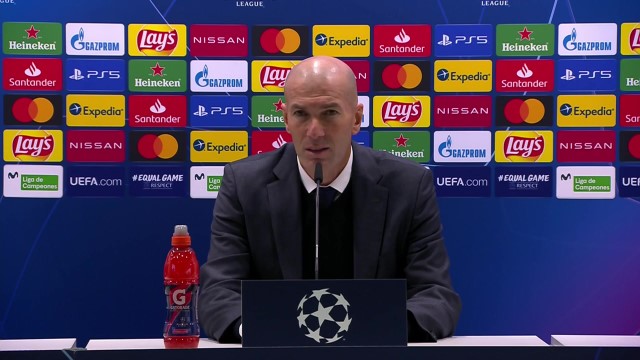 Real Madrid head coach Zinedine Zidane managed to relieve some of the heavy pressure surrounding his job performance with an important and convincing 2-0 victory over Borussia Monchengladbach on Wednesday night. Zidane discussed the game and his future during the post-match press conference in Madrid’s Estadio Alfredo di Stefano. The win meant that both teams went through an intriguing Group B. At the beginning of the night, no team was yet guaranteed qualification and every team had ways to go through to the knockout stages or out of the Champions league. «We and all the Real Madrid fans can be happy and proud of the team. This is what I care about. I think that the fans today must be very proud of the team. They know that we are always going to give everything on the pitch against all odds. Today I really enjoyed the game as a football fan,» stated Zidane. Despite the win and Real cementing their place at the top of Group B, questions were expected about Zidane’s future after a slow start to the season in Spain. When asked if he could become Real Madrid’s very own Alex Ferguson, Zidane rejected the comparison. Ferguson managed Manchester United for 27 years. «Well, I think I will never be Real Madrid’s Alex Ferguson. This is sure. What I know is that I want to enjoy what I am doing now. I don’t know how long I will remain here and I don’t think about it. I think about the day-to-day stuff and about how lucky I am to be here in this great club with these players,» answered Zidane. Borussia Monchengladbach celebrated the loss as if they had won the games themselves, as the draw between Inter Milan and Shakhtar Donetsk meant that the German side could sneak into the next round. Either team winning that match would have meant Monchengladbach would have been out of the tournament. Images of Borussia Monchengladbach watching the final seconds of Inter vs Shakhtar and the following celebrations went viral last night. «Of course when we got to the dressing room, I started to think about what might happen in the other game for us. We then heard relatively often that it was still zero zero, injury time, three minutes, four minutes, and some guys turned on their mobile phones, live scores showed different playing times on different mobile phones, at some point, the game was over and I believe everyone here if they were near, heard that there was a big reason for us to be happy,» exclaimed Borussia Monchengladbach manager Marco Rose.
https://ruptly.tv/