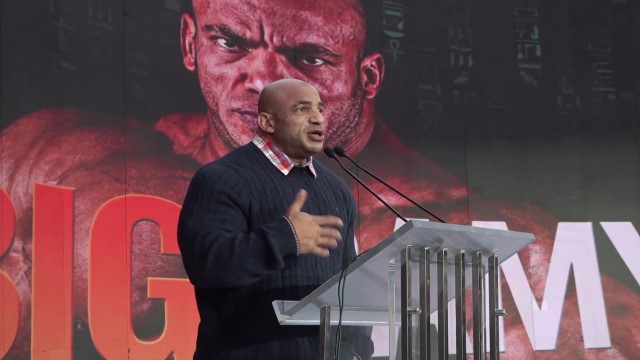 Dozens of Egyptians received today at Cairo Airport bodybuilder Mamdouh Elssbiay, famous for «Big Rami», after his return from New York and winning the Mr. Olympia prize. The fans and family of Big Ramy gathered outside Terminal 3 at Cairo Airport and wore T-shirts bearing his picture, next to a number of vehicles carrying large banners for his photo. As soon as he left the airport, Big Ramy took an open bus to cheers and greetings from his fans. The Minister of Sports organized a ceremony for him immediately after his arrival in one of the hotels overlooking the pyramids to celebrate and honor him. A large crowd gathered outside Cairo Airport on Thursday to welcome Egyptian bodybuilder star Mamdouh Elssbiay, known as ‘Big Ramy,’ as he returned home as the 2020 Mr Olympia champion. Upon Ramy’s arrival, the Minister of Sports Ashraf Sobhy organised a celebration ceremony in one of the hotels overlooking the Giza pyramids after an open bus tour in the streets of Cairo. Ramy was crowned Mr Olympia — arguably the most important man’s bodybuilding competition — on Sunday in Orlando, Florida. The 36-year-old bodybuilder beat famous competitors including Iran’s Hady Chopin and Phil Heath and Brandon Curry from the US, to win the International Federation of BodyBuilding & Fitness (IFBB) prize of $400,000 (€328,000/£295,000). «I only had one goal, awake or asleep, even in dreams I was thinking of the championship,» Big Ramy told the crowd. «The championship, in the beginning, touched Ramy personally, but the dream was not his only, the dream became for the fans of Rami and the people of Egypt and the entire Arab world, he wants to succeed and that the dream be his own,» Big Ramy added.
https://ruptly.tv/