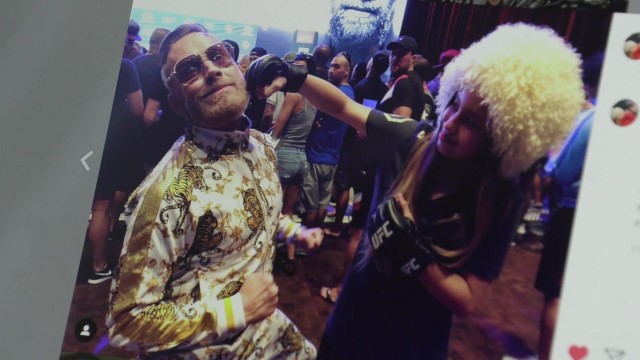 Kylie Meade, a 14-year-old girl from San Diego, California, is a superfan of UFC lightweight champion Khabib Nurmagomedov, who inspired her to train devotedly in martial arts, as seen on Friday. After Kylie created an Instagram account dedicated to her passion for Khabib, choosing ‘Mini Khabib’ as her username, she managed to meet a lot of celebrities of the MMA world, including Ronda Rousey, Dana White, John Jones and Justine Gaethje. Kylie became a big fan of Khabib after he defeated Michael Johnson in 2016, but her favourite match was Khabib vs Conor McGregor, which she attended in 2018. «I really like how dominating he is in his ground and pound, how violent he is. And how he is just able to control people when he is on the ground, which is restless,» she said. Khabib Nurmagomedov always wears a hat made from sheep’s skin and wool traditionally worn in his original birthplace in Russia’s Dagestan region. In her page, she has posted pictures of her with celebrities wearing Khabib’s hat, launching a successful Instagram challenge called ‘Khabib time.’ «I got the Papakha at an open workout when he was doing a Q&A with his fans, and he said, whoever asks the best question, he would give his Papakha to. So I asked why he always wore his hat, and then he told me the story behind it and what it means, and after the Q&A, he gave the hat to me,» Kylie explained. «When Khabib retired, I was a little bit sad, and I was emotional, but I’m glad he was able to go out on top because a lot of fighters don’t get to do that,» Kylie said. Khabib, 32, announced his retirement with a shocking public statement in October 2020, following his mother’s wish that he would no longer fight.
https://ruptly.tv/